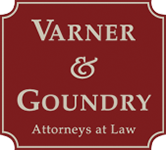 Varner & Goundry is a professional corporation whose members and associates are trial lawyers specializing in personal injury defense, medical negligence defense, and administrative law as it relates to the privileges and licensing of physicians in the State of Maryland. Conrad Varner, the founding partner, was a former member of Miles & Stockbridge and Ed Goundry was an associate there. Together they left Miles & Stockbridge to form their own firm in 1997.

Ed Goundry served as the Articles Editor of the University of Baltimore Law Review. He is admitted to practice law in Maryland, the District of Columbia, and West Virginia. Ed is qualified under the Maryland Rules to serve as a mediator in personal injury cases and health care malpractice cases. He frequently serves as mediator in court-appointed cases in Frederick County. He has served on the Board of Directors for Volunteer Frederick and the Monocacy Aquatic Club.

Matt Fogelson joined Varner & Goundry in 2011. Since that time, Matt has focused his practice in the areas of civil litigation, medical malpractice defense and professional licensing and credentialing matters before the Board of Physicians and other state licensing boards.

Prior to joining the firm, Matt spent five years working in the Maryland Office of the Public Defender where he did trial work in Frederick County and later worked in the Office’s Appellate Division. Matt also clerked for the Honorable Donald E. Beachley and the Honorable John H. McDowell of the Circuit Court for Washington County. Before attending law school, Matt worked for a major insurance company where he investigated and handled environmental claims including asbestos and pollution claims, many of which were involved in ongoing litigation.

Members of the firm have served on numerous community and non-profit charitable organizations including the Association for Retarded Citizens of Frederick County and Washington County, the Maryland Disability Law Center, the Legal Aid Bureau, and MedSource, Inc. Members of the firm are frequent lecturers on risk management for physicians. They have also published educational materials relating to medical malpractice.